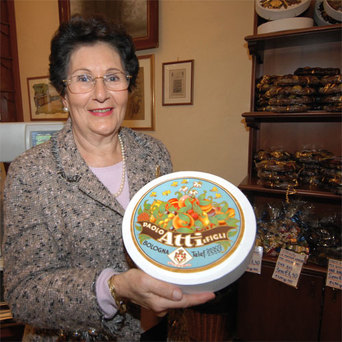 Together with its universally renowned tortellini, which it has been making ever since 1880 and presenting in period-style boxes, each with its own “instructions for use”, the Pasticcerie Paolo Atti & Figli in Bologna also make another historic Bolognese delicacy: Certosino, or Panspeziale, a traditional sweet almost certainly dating back to the Middle Ages, when it was used to celebrate the festivities at the end of the year.
Like recipes for other typical Bolognese products which are registered with notarial deed at the Bologna Chamber of Commerce, this speciality was certified by the Bologna delegation of the Accademia Italiana della Cucina on 23 June 2003, after meticulous examination of its origins and history.
It is said that the recipe was kept safe by Carthusian monks, and it was then used by “speziali”, the chemists of the day, who used to prepare medicines, perfumes, essential oils, and often sweets too.
The Certosino is a triumph of flavours: honey, candied fruit, stewed fruit, jam or mostarda, pine-nut and almond kernels, cocoa powder, plain chocolate, cinnamon, and wine syrup. Atti makes it all year round, and ships it around the world packed in the same Liberty-style boxes in which it was sold in the 1920s.